When square blocks in a quilt are rotated 45 degrees (turned to a diamond shape) they are said to be set on point.

The nine patch blocks below are quilt blocks set on point (rotated to a diamond-like shape) in this quilt. The next photos compare the difference between “set on point” (top block) and a traditional set (bottom block). 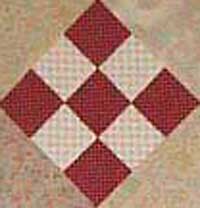 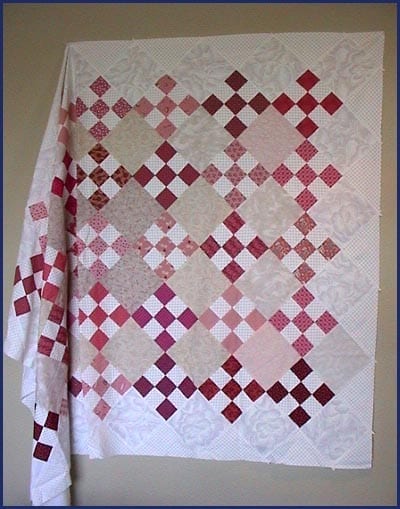 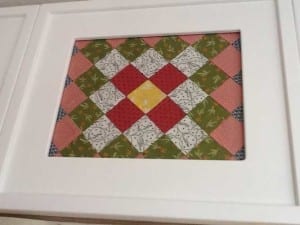 After quilters make their quilt blocks, they need to decide on a setting. There is no right or wrong setting. It is up to the quilter to decide what is most pleasing.

View the following video to learn about different ways to set your blocks in your quilt.

I’ve put some blocks on the design wall to illustrate the idea of what it means to set blocks. So in this setting, the blocks are sitting side by side; there’s no sashing or any alternative blocks between them. And I’m not sure if I like this setting because the blocks sort of blend in with each other. I think they probably need something to separate them so you can see each individual design better.

So I put these blocks on point now and you’ll notice over on the right I have a block that I can’t fit into this setting because it just doesn’t come out even. Also, I needed to fill in the sides and what I filled the sides in with are called setting triangles so the red pieces of fabric you see around the sides. So I don’t know if I like this setting that much. Usually I like when the blocks are put on point, but I still think that you don’t get to see each individual block; they sort of gets mushed together. So let me try something else.

So now I’ve put up some strips of sashing in between the squares and I actually like this better because it shows off each block but I was thinking that this wall hanging would be a little bit bigger so I’ve decided that maybe I would like to add an alternate block to make it bigger. I’ve added alternative blocks to my piece blocks. Alternative blocks can be made from fabric like the red ones here, or they could be another piece square that goes between my piece blocks. My quilt has gotten larger, but I’m not sure that I like this look. Also, once again, I’m stuck with an extra square, so I can either make another square and add on a row with three more alternative blocks on the bottom or I can just toss out that square. So I think I’m going to try something else; a different setting for this.

By turning the blocks on point and using alternative blocks, I can get another setting. So you see the four alternative blocks in the center, and the setting triangles around the outside edge. Now my blocks are separated and each one’s design stands out. My quilt’s also larger than what I started out with.