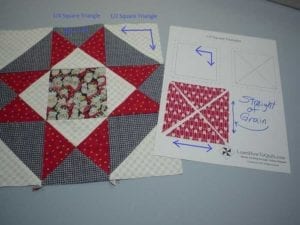 In the photo above, the white triangles in the corners are HST’s.  They work best in the corner because the straight of grain falls on the outside edges which helps keep the block flat.  The red star points, grey section between the points and the white triangles in the middle are QST’s.  The straight of grain of the grey triangles also falls on the outside edge of the block.

There are many ways to make QST.  Most people prefer rotary cutting rather than using templates. To rotary cut these triangles, you will need to find the finished size of the triangle (length of the longest side). The “formula” (listed below) works like a charm every time.