Blocks that are left over from quilting projects are called Orphan blocks. These blocks can be recycled and placed in new projects or they can be traded with other quilters. 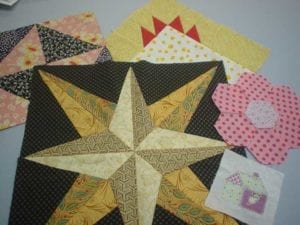 Learn about orphan blocks and start a collection of your own.

Orphan blocks are blocks that don’t make it into a quilt. They’re blocks that don’t have a home and often they are individual blocks, however in this case I have a couple orphan blocks from a house quilt. How did they become orphan blocks? Well, for whatever reason I decided that I liked other blocks better. I know on this basket quilt here, I had a couple orphan blocks left over, this one, I thought it was too big and this one I thought I went a little too crazy with the colors. This is a small orphan block I have. I thought that the red was a little too dark. While this orphan block, I thought that the gold was a little too light. Sometimes orphan blocks are blocks that you might really really like. For example, this is one of my favorite blocks, but it just didn’t look right in the quilt and so I used another block; kind of in the same colors, but I liked this one better. Just like this one. This one also did not make it in the quilt, but I liked this one better than the one in the quilt, but when I put this in the quilt, the rest of the blocks didn’t look right. Sometimes you can get orphan blocks from people giving you blocks, or you can buy them in antique stores, like this one. What do you do with orphan blocks? Well you could just save them, make them into pillows, use them in other projects. For example, these are orphan blocks from a quilt I had completed a while ago and I decided that I’m in the process of making them into a wall hanging, I had three stars to do that.