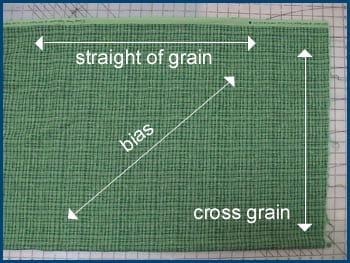 The cross grain of a fabric, also called Crosswise Grain is the grain that runs crosswise (at a right angle) to the selvage.

In order to find the fabric’s cross grain, you need to be familiar with some other terms. The selvage is the light green strip at the top of the cotton fabric pictured below. Often it is a different color and has the name of the manufacturer printed on it. When you tug on the selvage, it does not “give”. Never use the selvage in your patchwork.

The cross grain is parallel to the cut edge of the fabric (if the fabric shop carefully cut your piece off the bolt). In the photo below, on the right side, you can see the threads fraying where the fabric was cut from the bolt.

TRANSCRIPT: Crosswise Grain or Cross Grain of a Fabric; Encyclopedia

Anything that’s not on the straight of grain or the cross grain is called the bias. True bias is at a forty- five degree angle. Now, so the bias is going to be at this forty- five degree angle. The bias has the most give, as you can see. So if you want to test out and see if you can find the selvage, which is the straight of grain, or the cross grain, one of the easiest ways to do it is just to tug.